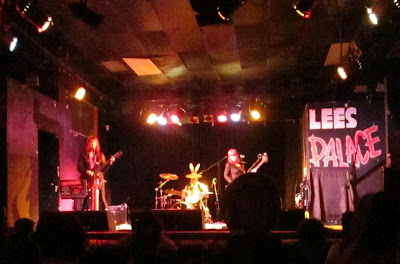 C - Actual conversation with the sound dude:
Me - “If there is anything we can do to make your world easier, just holler.”
Him - “Die?” (laughs)
Me - fake-laughs, backs away.
Ask Bella privately about her B-O-D theory. She may be right.
D- It’s too bad years of bad bands and shitty pot have made said sound guy a
B-O-D. But he is a good sound man, I’ll give the motherf***** that!
M--Yeah, he certainly added a sense of adventure to the evening, along with a sense of surl.

C - I was running around like a spazz taking care of last minute things, when finally, just past 8:30 doors, I had 10 minutes to run to washroom to do my vocal warmups. (Sorry to anyone who had to pee while I was making crazy noises in there! Gee-YAH, Gee-YAH, Gee-YAH!) When I got back downstairs, the place was full of people! I was instantly relieved. And, thanks for everyone who came early and warmed the room up. It was COLD in there until all of you hot people arrived!
D - From what Bella and yourself put into this night. I would say it was a huge success! Two
thumbs up and whatever else was “up” in the process!
C - Very glad you were wearing pants instead of fishnets.
M--I kept doing laps of the room like a hamster, pulling the “oh, I see someone else I have to say hi to!” so I could keep running around. It was partly nerves, mostly trying to stay warm. But it was really awesome to see so many people there!

C - Pavlov’s Dogs Handbell Ensemble were amazing. They were super tight, and bells just ring right through you. It’s one of those things that will sound nice recorded, but amazing live. There is just no comparison.
D - Thankfully they’re not Pavlog’s Dogs Bagpipe Ensemble! Not that there’s anything wrong
with that! OK, there’s a lot wrong with that!
M--Seriously, is there anything better than nerdy tunes on hand bells? So pretty...

C - Perhaps our Whoredrobe Conslutant could explain our getups this time around?
D - Yes, Mandy...And explain how even your amp was “dressed” for the occasion!
M--Yeah, since we were finally playing the classic rock venue, it seemed like the time to bust out some classic glam rock. And I thought Cyn would totally rock the Ziggy Stardust. So she got to be Alladin Sane, I was Keith Richards circa Altamont (sans Hells Angels security), because I’m not a Stones fan, but damn they were stylish back then, and Doug was the inimitable Bun E. Carlos. Because if you’re going to pretend to be rockstars, you might as well pretend to be stylish rockstars. And Cyn needed another occasion to wear those crazed silver boots.
Oh yeah, and for once, the pants on the drum kit weren’t the drummer’s, and the thong dangling from my amp, also not the drummer’s. When we got on stage to set up, I discovered that my amp had been dressed with the casually tossed frillies of one the Nerd Girls. I think I squealed and insisted that Doug take a bunch of pictures, because when is anything that awesome likely to happen again? 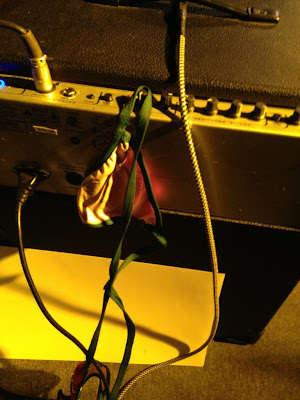 C - Our very first song featured Loretta Jean, the slinky little Devil - apparently drinking tequila makes her naughty. I cannot blame myself for missing a few chords with this super hot distraction dancing right beside me! Video Proof: https://www.youtube.com/watch?v=rgzVonj3iPs
D - ASSELS! That is all!
M--Assels was the new word I learned, and I can’t tell you how much it’s improved my life. But watch the video--they can improve your life too! 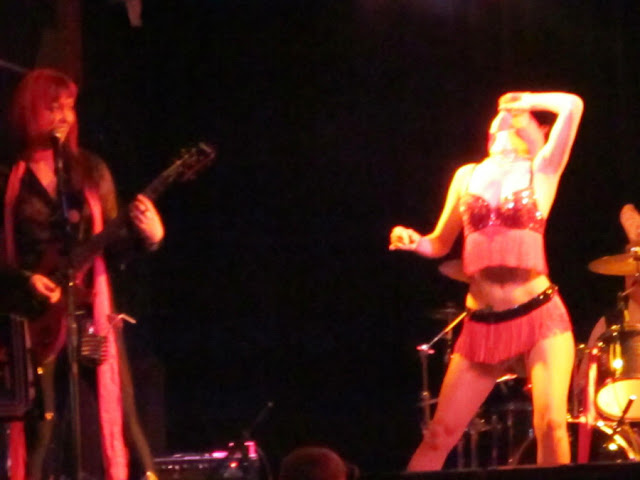 C - The night was jam packed full of “OMG this is amazing and I cannot believe this is real!!!” moments, but one really sticks out. After Lucky’s number, it was time for Mississauga Booty Call, and for our HighLoGoGos (Kate, Tess, Bailey, Kelly, Ashley, Lucy Loop) to slink onto the stage. I looked to my left to make sure Mandy and Doug were ready to roll, and saw the girlies at the bottom of the ramp, in their amazing outfits, pink warpaint under each right eye, practically bouncing with the anticipation of launching themselves onto the stage. If I were a girl, I would have gotten a little teary right then. But that would cause my throat to close, and there was still much more rock & roll to sing. Heh heh. The crowd reaction when they came on was fantastic! Like, wow, even MORE dancers? Woohoo! The girls really brought it. I cannot believe how perfect they were. Check it out: https://www.youtube.com/watch?v=tjs8MF1xbDs
D - Oh, the horrors I have to endure in the name of Rock & Roll! NOT! :)
M--I looked over too, just as Bailey was slinking up the ramp, and had a “oh MAN this is gonna be good!” moment too.
Also, I would like to point out that I managed to make it through Lucky Freemont’s Littlest Hobo without turning into a squealing puddle of giggles, like we all feared I would. I think there were some tea kettle noises and pearl-clutching after he finished--I’m not sure, his whole number was all a bit of a blur of just trying to stay on the train--but I kept it together...well, as much as I ever do. 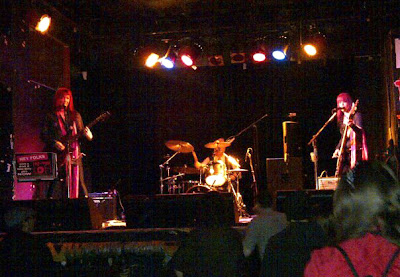 C - Just before Big Dumb Rock Song, as the pom-poms were being thrown at everyone, I hollered for more ladies to join us on stage. I could see two guys in front grabbing the pom-poms, laughing, but then talking seriously and nodding at the stage. Next thing I knew, they were at the bottom of the ramp, being all, “no YOU go first!”. Haha! They ran onto the stage & jumped & rocked out with the gals. Good for you guys! I hope they heard me scream, Hell Yeah!  I always ask for ladies first, since I just think there needs to be more chicks onstage and in rock in general. But if you want to jump & scream, get your ass up here!
D - Obscured by ass...again! What a world, what a world!
C - I sort of feel bad that you’re invisible in a lot of the photos, but then I see the cuties blocking you and figure you don’t mind so much.
M--It’s always a musical challenge when there are that many people jumping around on stage. I’m always worried someone is going to take out an amp, or trip over a cord, or get whacked by The Harlot and require first aid. But it’s always insane fun to try to play around everyone swarming the stage.

C - Okay seriously, how many people were up there for the last song? 12 to 15? When everyone jumped, you could feel it. Also, the contest of Loretta Jean’s tassles twirling vs. my voice holding the long note was hilarious to me. Obviously she won. Wow: https://www.youtube.com/watch?v=JUlmUG1Vles 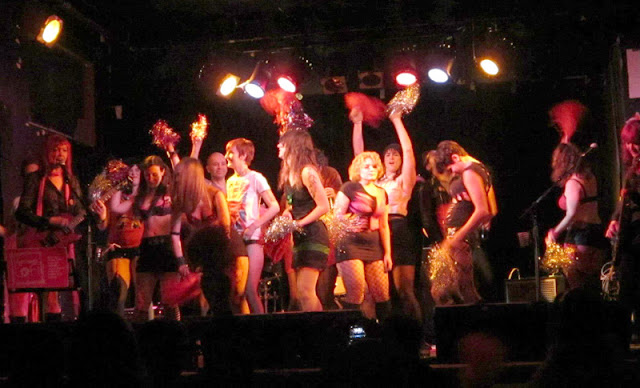 C -Late night poutine afterparty at Doug’s! I wondered why people in Acme Burger were looking at me strangely, I figured I was just being loud and spazzy. Oh right, I had a melted red lightning bolt across my face. Whoops. CLASSY. That’s me!
D - Puttin’ the ASS in CLASSY! That’s us! Mmmmmm...poutine!
C - Who invented sweet potato poutine? I need to hug you.
M--Gin and poutine is why I do this thing called rock. Well, that and the excuse to dress like a rockstar. Oh yeah, and the artistic expres...ah, I can’t even type that with a straight face. I just do it for the gin and poutine.

C - If you misssed this show, you should cry yourself to sleep for a few nights. But then you should mark your calendar - we’ll be at the Bovine Sex Club May 24th with The Alcohollys and The Anti-Queens! For those outside of Toronto, we’re in London May 25th at the Richmond Tavern, and Hamilton May 26 at This Ain’t Hollywood. Also, May 24 is Mandy’s.... secret special day of celebration? It’s going to get ROWDY!
D - YEP!
M--I’m a little afraid my liver won’t make it through that weekend...it’s gonna be awesome!!!
C - Going to name your liver The Energizer Bunny!

Posted by HighHeelsLoFi at 8:46 AM

HighHeelsLoFi
High Heels Lo Fi sounds like if Joan Jett was kicked out of the Ramones’ Rock n’ Roll High School for being drunk and acting like the class clown. High Heels Lo Fi is a madcap cocktail of rock, booze, and hilarity. Want to hear brilliant rock music? Go see AC/DC. Want to be bullied into singin’ along, drinkin’, dancin’ and laughin’ yer arse off with your friends? Come see High Heels Lo Fi. We’ll probably buy you a beer